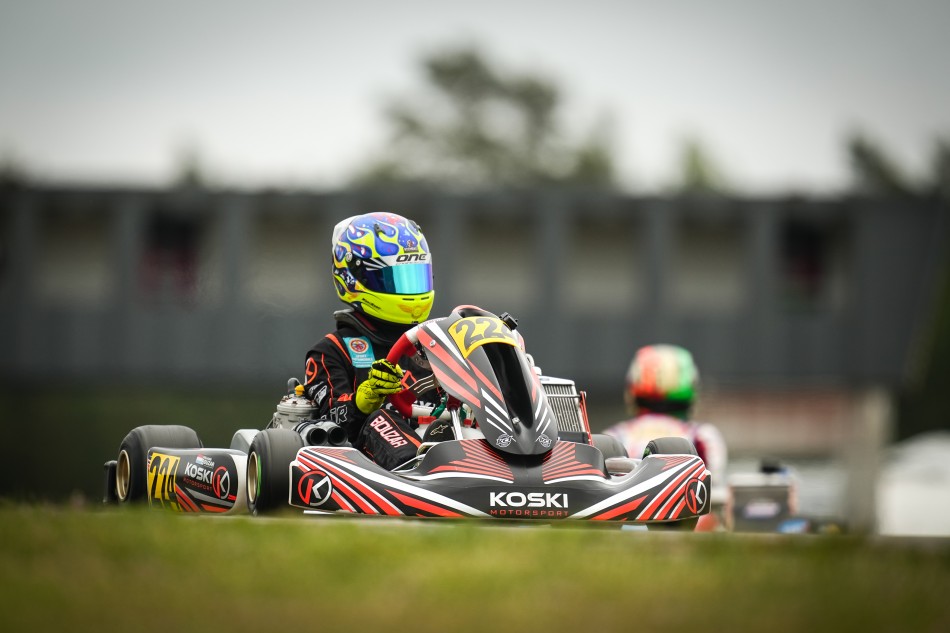 After Free Practice sessions marked by rain showers, the Åsum Ring was dry for the Qualifying sessions of the third round of the FIA Karting European Championship – OK and OK-Junior on Friday at noon in Kristianstad. The gaps were extremely close in both categories and it was Guillaume Bouzar (LUX) who finally proved to be the fastest in OK-Junior while Kean Nakamura-Berta (GBR) set the fastest time in OK.

The Kristianstad circuit was overcast with temperatures around 13°, but rain refrained from visiting Sweden. The conditions were good to make the most of the Vega tyres in OK-Junior and MG in OK. The main strategic options were to choose the right moment to start and to find a favourable position in the pack. The gaps were often measured in hundredths of a second, sometimes even in thousandths.

Bouzar continues his series of performances in OK-Junior

Guillaume Bouzar from Luxembourg took pole position in the previous round of the FIA Karting European Championship – OK-Junior in Spain and was also poleman in Belgium in the FIA Karting Academy Trophy. He repeated the feat in Sweden with a time of 51.590 on the third lap. He was 5 thousandths ahead of Anatholy Kavalkhin, the leader of the second session and 45 thousandths ahead of the Frenchman Jimmy Helias, who completed his best performance at this level in the first session. The provisional leader Nathan Tye (GBR) finished 14th, just ahead of his direct pursuer Dmitry Matveev. The third in the Championship René Lammers (NLD) was only 28th, the fourth Jules Caranta (FRA) 18th and the fifth Enzo Tarnvanichkul (THA) eighth. Some outsiders like Kirill Kutskov, Lewis Wherrell (GBR) and Emanuele Olivieri (ITA) were in a good position in the top 10 of Qualifying.

Guillaume Bouzar explained how he managed to take his third pole position:

“I tried as usual to make sure I had enough space to the drivers in front of me. I was able to catch them on my fast lap without being blocked. The equipment was top notch. Thanks to my team Koski Motorsport and to One Engines, the tuner of my Vortex. This is my third pole position in a row, after Zuera in OK-Junior and Genk in the FIA Karting Academy Trophy. I intend to use this advantage to aim for victory here in Sweden.”

It was also during the third timed session that the Briton Kean Nakamura-Berta achieved the best time in the Qualifying sessions of the FIA Karting European Championship – OK in Kristianstad. With his time of 50”314, the third-placed driver in the provisional classification of the Championship was 22 thousandths ahead of the German Maxim Rehm, the fastest in Session 1 and 1.5 tenths ahead of the Jamaican Alex Powell, fastest in Session 3. The top 20 were grouped within three tenths of each other. Championship leader Joe Turney (GBR) was only 30th, but his ability to make up ground in the Qualifying Heats is legendary. Amongst the other top five European drivers in the class, Enzo Deligny (FRA) finished 25th in Qualifying, Evan Giltaire (FRA) 20th and Ean Eyckmans (BEL) 18th.

“I can only be satisfied with the way Qualifying went. Thanks to this pole position, I will be in 1st place at the start of all the Qualifying Heats, which gives me a clear advantage. I had a very good grip during my session, the IAME engine was up to the task. I would like to thank KR Motorsport and the IAME factory for this excellent package.“

Friday continued with five Qualifying Heats in each category. A further 10 heats will be run on Saturday 4th June before the intermediate rankings are revealed to determine the starting order of the Super Heats on Sunday morning.

Provisional programme for the Kristianstad event

The Kristianstad event can be followed on the official FIA Karting Championship app for mobile devices and on the website www.fiakarting.com.